Animal poisoning is defined as the wrongful and unlawful administering of poison to an animal. That would constitute the crime of malicious injury to property if death resulted, or an attempt to commit that crime if the animal was poisoned but treated in time. The poisoning of dogs, as a precursor to further crimes such as burglary, robbery, rape, etc., is extremely common in South Africa.

Quick response to a dog poisoning incident is very important, which is why the CMS Patrolman that is on duty at the time will attend to the incident. The patrolman will also remove the deceased animal, decontaminate the poisoned area and provide transport to a veterinarian for incineration.

The incinerating service is provided at a fee by Mercury Street Veterinary Hospital (during office hours only). 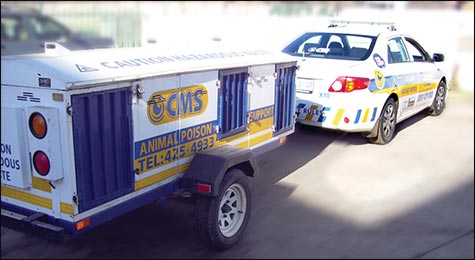